This information may be subject to change after the movie's release. Thank you for understanding!

Naoya Kido (木戸 ナオヤ Kido Naoya) is a character in Wave!! and a certified otaku.

He expresses worry not being able to watch late-night anime. Naoya acknowledges to himself that the name of his technique has been given a dreadful name.

Naoya Kido is shown with wavy white hair that matches with his dark purple eyes. His swimsuit is mainly a pastel pink that turns black and gray from the legs down.

His surfboard has an image of Miruru on it, from the fictional show, Magical Girl Miruru. His stomp pad has a light green, blue, and pink striped pattern with small black zig zags and white dots on it.

Naoya appears to be reserved when it comes to anything other than anime. He is very animated over his favorite character Miruru specifically, and will do anything to support her through monetary means. Outside of his interests, he is not very motivated. Despite being talented at surfing, he slacks off a lot and doesn't take the sport super seriously.

Naoya is a "country kid" from Oita and an otaku who worries about not being able to watch late night anime when they air. He started surfing because there was nothing else to do, but once he participated in tournaments and realized he could go to big cities and watch anime, he became really passionate. He's a very skilled surfer and calls his technique "chūnibyō" (spelled with different kanji commonly used by Internet otaku). 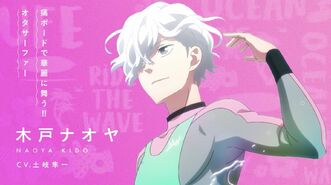 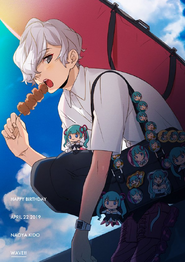 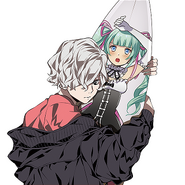